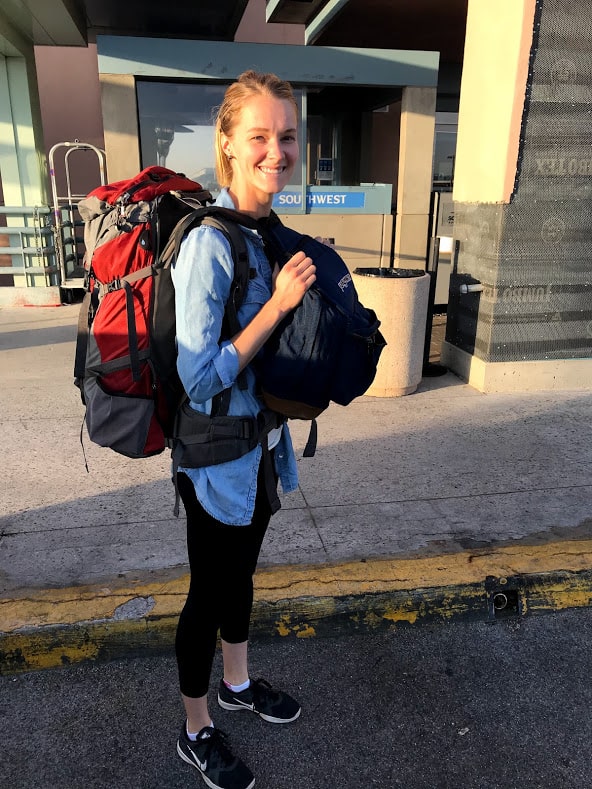 I had always dreamed of going to Morocco; something about the red sands of the Sahara, the vibrant patterns of the mosaics, and the hustle and bustle of the souks called to me. But two weeks in Morocco was a hard sell for some of my friends who couldn’t get the time off work, so I struggled to find someone who wanted to go with me. And that is how I ended up on a plane to Casablanca ALL. BY. MYSELF.

The part that scared me the most was taking the train to the taxi to my Airbnb upon my arrival. How in the world was I going to purchase the ticket to the correct station, and then hail a cab on my own IN MOROCCO?? I had a giant backpacking backpack on, and I’m a nearly 6 foot white female. I knew I was going to stick out like a sore thumb. I had also heard that taxis in Morocco are tricky; you have to push hard to get them to even use the meter, otherwise you have to bargain with them for a reasonable price, and I certainly had no idea what the going rate was for getting anywhere in Africa, or what “reasonable” meant for this situation.

But I did my research on which train to take, and asked my Airbnb host for a good rate for the taxi. I had the address on a little scrap of paper in my purse, Google Maps downloaded on my phone, and I felt as prepared as I possibly could be. On the plane, I met another younger woman who was heading to Morocco to teach for a month, so we stuck together through currency exchange and then bought our train tickets together. I think it helped me to meet someone younger and more unsure. Hey, I got this in the bag. Look at me giving advice on Moroccan transportation! Insert self-deprecating eyeroll here. A very nice young Moroccan man who lives in Canada part-time was also able to give us some advice, so let’s give credit where credit is really due.

After purchasing the ticket, and saying farewell to my new friend, I knew it was time to leave the “safety” of the airport. I boarded the train and sat down, a giddy nervous smile plastered on my face as I hugged my backpack to my chest. I was a bundle of nerves mixed with the high of landing in a totally new place. After a few minutes, the train lurched out of the station and I was off. Scary thing number one complete!! Now I had half an hour to dread the cab ride. I looked out the window and took in the scenery of industrial Casablanca. I even struck up a conversation with some people on the train; a couple who spoke limited English but were looking for a hotel in Casablanca, and a college student from Canada home for the weekend. It was FUN and I realized I wasn’t going to be completely alone.

When the time came to get off the train, I steeled myself and headed out the station doors, joining the stream of local Casablancan commuters. And there they were: the little maroon cabs, all lined up in a row while the drivers lounged in the early morning sun. Show time. Who shall emerge victorious in this epic battle of woman vs taxi? I took a deep breath, marched up, and thrust my little scrap of paper into the group of drivers, while announcing assertively that I was going to only pay 20 dirham to get there. And then I waited, in all my sweaty, 15 hours of travel glory. There was much discussion between the men as they looked at the little paper with wrinkled brows and began pointing at their cabs and in various directions, shaking their heads and chattering loudly in a language I did not understand. Maybe I should have had someone write it in Arabic, I started to wonder as I stood there awkwardly. It felt like the longest minute of my life, but at the end of it, the man holding the paper nodded his head, confirmed the price, and soon I was stuffed into the back of the cab. Here we go! I either make it or die, I thought to myself, quite dramatically.

And you know what? I did make it. I found my Airbnb, and all the Airbnb’s later and the hotel where I needed to meet my tour group. I booked more train tickets and took taxis without getting swindled (and sometimes I did overpay). I found friends, and ATM’s, and restaurants and grocery stores so that I could eat. And it is cheesy but I don’t care, because I also found myself in Morocco. This is the story of how a single cab ride became a game changer for me. That first taxi ride in Casablanca is one of the most empowering things that I have ever done in my life, and I think about it all the time. When I am faced with something that feels impossible, or scary, or hard, I think about Robin in Morocco and how she hailed that cab like a boss, even though she was scared, and I just love her so much for doing it anyway. To this day, I reach into my purse and feel that little scrap of paper that I still carry with me that has the Airbnb address on it, and I say to myself “You can do ANYTHING!”

I hope you have your own “cab in Morocco” story, your own little mountain that you faced down and climbed, despite your fears. I hope you lean heavily on those moments in the tough times, and that you actively create those situations in your life, because meeting the challenges is what makes life so damn fun sometimes. And if you don’t have those stories yet, feel free to borrow mine. If this flailing woman can do it, so can you.