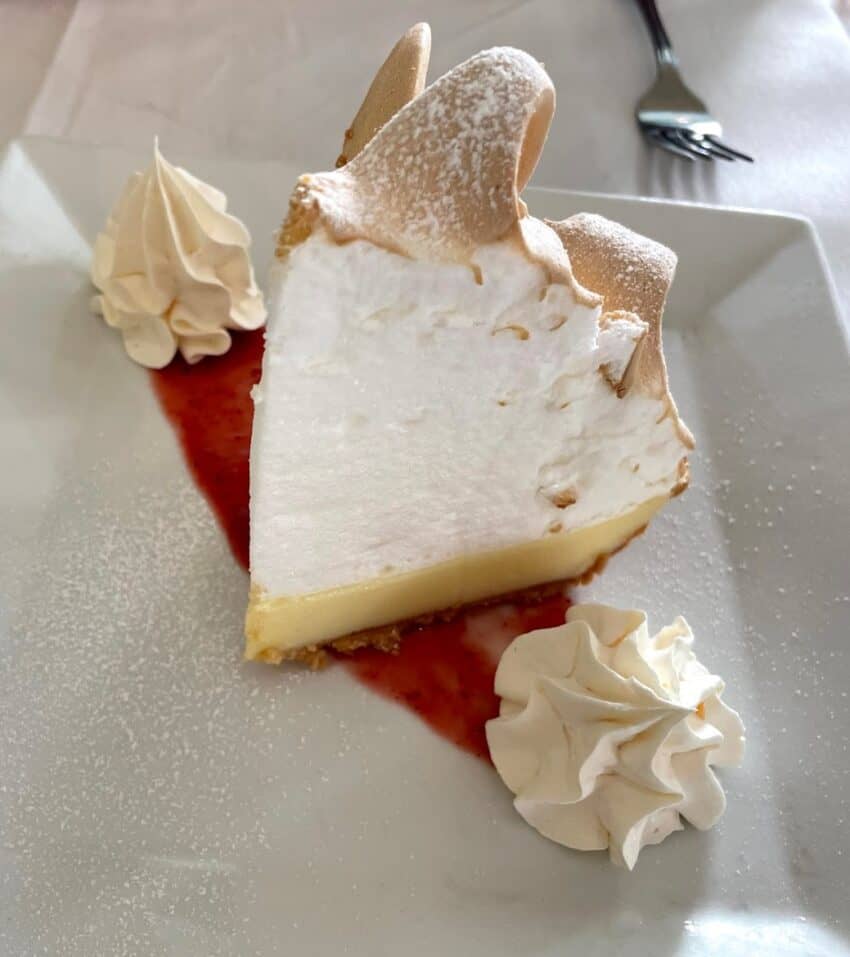 When I booked a week-long trip to Florida for spring break, I knew that I wanted to eat as much key lime pie as possible because…you know, when in Rome! Inspired by the college basketball championships being played at the same time, I present to you The Great Key Lime Pie Face-off: March Madness Style! Each dessert is pitted against a worthy and ranked opponent to see which will emerge victorious with the crown of Best Key Lime Pie of Spring Break 2021!

Next up, Joe’s Stone Crab went up against The Palm. While it was the only circular pie we ate, and it had a unique sable crust , whatever points it scored due to creativity weren’t enough to overcome the perfection of the graham cracker crust of Joe’s Stone Crab, which advances to the next round.

Blue Heaven took on Bagatelle in the battle of the meringues. Both offered impressive height and flair, but Bagatelle just edged out Blue Heaven with the addition of the whipped cream to advance to the next round.

And finally, Turtle Inn vs Truluck’s was a fight to the finish, with Turtle Inn bringing a beautiful cheesecakey texture, but ultimately, the perfect ratio of crust to pie to whipped cream allowed Truluck’s to sneak away with the victory.

After the first round, Bazaar comes away with a double bye, and automatically makes it onto the finals because I didn’t eat enough pie to make this bracket thing easy.

In the second round, Joe’s vs the Key Lime Pie Factory, Joe’s defeats the Factory with the help of its partially frozen pie, which added a delicious and refreshing taste. Joe’s advances to the semi-finals.

The second round is a battle of berry sauces (unpictured for Truluck’s). Truluck’s wins by a nose with its berry compote (Bagatelle’s just had strawberry jam, which was not my favorite). However, it was a close call with the almonds which had a distracting texture. Bagatelle is edged out by the little guy, proving you can’t underestimate the underdog.

In the semi-finals, to see who will compete against the heavily favored Bazaar dessert, we have Truluck’s against Joe’s. Joe’s wins purely on ambiance. This restaurant was pumping out stone crab and pie with incredible efficiency and professionalism; I couldn’t believe how quickly everything was ready. Plus it doesn’t help that we ate Truluck’s standing up at the airport out of a to-go container, desperate to squeeze in one more piece before we left.

And finally, the moment you have all been waiting for! Bazaar vs Joe’s in the final! Many thought Bazaar was too pretty to put up a good fight, with its untraditional shape, but those INCREDIBLE little toasted meringues tasted like marshmallows from heaven, and the creamy key lime filing along, with the foam, added the perfect level of tartness. But, it was THE WHIPPED CREAM from Joe’s that did me in. It was luxurious and sweet and utter perfection, combined with the sugary crust and the slightly frozen cake. And that is why, despite the uniqueness of Bazaar, I am crowning JOE’S STONE CRAB KEY LIME PIE as “The Best Key Lime Pie of Spring Break 2021.”

THE WINNER!!!! Just look how luxurious the cream is!!!

1 thought on “The Great Key Lime Pie Face Off”