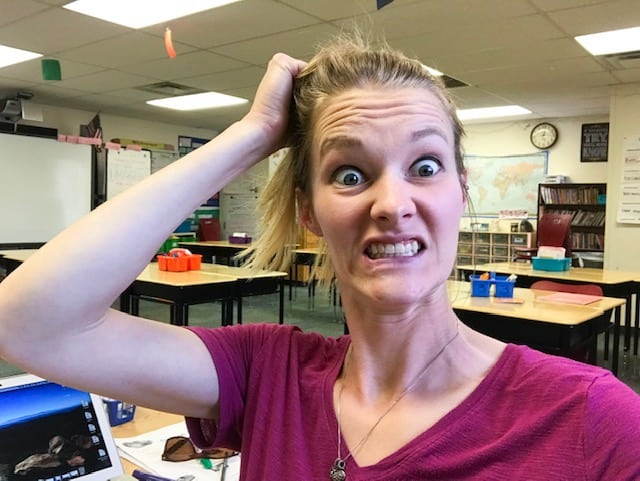 I know I am not the only teacher who has been baffled by the following scenario: You are putting your heart and soul into the lesson you spent careful time and consideration planning, using research-based tactics and pre-planned questions, and you look up and about two of the kids are looking at you and engaged in the lesson. Three others are doodling on their desks or notebooks, a few are picking their nose, one is very interested in the hem of their sweatshirt, another is experimenting with what scissors do to a pencil eraser, some are whispering about something that happened at lunch, and the rest are just CHECKED OUT.

You swallow the urge to scream, finish your teaching, ask if there are any clarifying questions (there aren’t) and then say Ready Set Go! Suddenly  no one knows what to do and it is as if you were speaking ancient Greek the entire time. You take several deep breaths, remind yourself that you are responsible for their high stakes test scores, and spend the rest of your instructional block playing whack a mole to re-explain the content and instructions.

MY DEAR TEACHERS, THIS SHOULD NOT BE!!

I get it. 100%. Time is the highest commodity for us and it’s almost panic-inducing when you realize that, after your carefully planned lesson that lasted 10-15 minutes, they still have no idea what to do, and now you have to use all their practice time to reteach and then they can’t practice, which is the main way they learn. Suddenly math is over and no one knows anything and you want to run away to the closest office job you can find where you can wear heels and pee when you want, and no one will bother you or fart audibly and you can take an hour for lunch if you want!!!!!!!!!!!!!!

So here is what I am trying lately, and it’s a little tricky, but I think I am on to something.

I have decided I AM NOT GOING TO RETEACH A PERSONAL LESSON TO EACH CHILD THAT DID NOT BOTHER TO LISTEN IN THE FIRST PLACE.

And this is not to be nasty or un-helpful, but to teach them a valuable lesson about listening the first time. To emphasize that when we are doing our song and dance up front, the words we are saying are valuable and the content we are talking about is important. That they are responsible for their own learning and that means paying attention. I emphasize that we are a team: I plan lessons and activities and answer questions, but it is their job to listen and participate and ask good questions.

I tried this in my classroom just last Friday with a student. I circled around and asked her if she knew what to do during math centers, when I had clearly seen her looking at the back wall and drawing during the lesson. She stated that she did not know what to do (which was not a surprise), and we had a meaningful conversation about how she needed to do her job as a student. This same thing happened with about three students on Tuesday. During math practice, all the rest of the kids understood how to do the work, or at least how to start, and these three didn’t have a clue. It was powerful to sit with them and point out that they were the only ones behind because of their behavior. I told all three of them they could look back at their book and some of the sample problems in order to get some ideas on how to begin. Then, after they realized it was a little tricky to teach themselves, or had attempted some of the problems on their own and struggled a bit, I helped correct their thinking, but not until they first experienced the natural consequences of not knowing what to do as a result of inattention.

This doesn’t immediately fix the listening problem. Teachers know that it will take some kids multiple times before it sinks in that they should pay attention. For other kids, this won’t work at all because their attention issues are less of a choice. But I will say, the next day during math, all three of the students who were checked out the day before were paying attention during the lesson. I saw huge improvement from the day before.

(A quick disclaimer. I teach 4th grade. I think you could do this in 3rd, but it might not be developmentally appropriate for lower than that. Not sure. I haven’t taught the littles in a long time, thank God.)

To be clear, I am not supporting abandoning students who haven’t listened. I plan to work extra hard to remind them, during the lesson, to stay on track and be focused and take notes and ask questions. But I am going to let natural consequences fall if students are not going to do their part. And if that means one or two incomplete assignments go into their portfolio, that leads to a powerful conversation with parents about personal responsibility.

These are just some thoughts I had recently. It’s a new idea and I have barely started implementing it. It is possible that it won’t work at all long term, but I can’t help but feel that I am enabling some of this off-task behavior because kids know they can just get the lesson personally served to them later.

We as teachers need to first realize that our words and lessons are valuable commodities and we ourselves need to treat them as such. When we realize and act on that truth, we will be able to help our kids become more responsible, participating students who take ownership for their own learning.

I’m curious what you think. Teachers, parents, non-educators, students, weigh in in the comments!